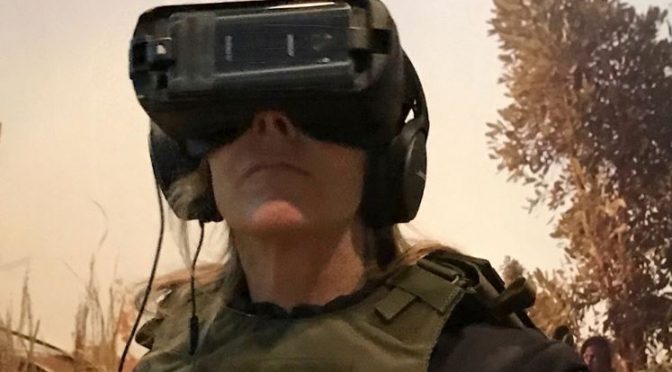 He stands in the railway car that delivered him and his family to the camp. He walks to the gas chamber and the showers. Some rooms he can’t bear to go in. He shares his recollections and tries to remember what he can of his family. All he can really visualize of his sister is the fleeting image of her golden braid of her hair.

Walking with Gutter in Majdanek is an undeniably powerful way to make the Holocaust tangible, and to see it through a survivor’s eyes. Now, being Gutter’s companion as he revisits his painful past is an experience anyone can have just by putting on a headset.

The virtual reality piece “The Last Goodbye,” made from 3-D video and thousands of photographs at Majdanek, is being billed as the first Holocaust survivor testimony in room-scale VR. It premiered at the Tribeca Film Festival, where the medium’s growing ambitions have been on display over the past week.

What “The Last Goodbye” and other works show is that virtual reality, while still very much in its early days, has a potent ability to foster empathy. In transporting you to an intimate space with someone, it gives that old expression, “walk in my shoes,” a new, high-tech, physical dimension.

That’s literally the concept behind Katheryn Bigelow and Imraan Ismail’s “The Protectors: Walk in the Ranger’s Shoes,” an 8-minute, 360-degree visit with the Garamba National Park rangers. They defend the Democratic Republic of the Congo park from waves of poachers.

Ismail, whose earlier, award-winning VR experience, “The Displaced,” followed three child refugees, says of virtual reality: “It enables empathy because it enables a kind of presence in someone else’s space. And breaking through apathy.”

“For me, it’s exactly that. It’s empathy,” says Bigelow. “Here are these individuals who put their lives on the line in order to thwart the problem. Sometimes they pay the ultimate price. In order to be able to help, you have to be very well informed.”

Big names filmmakers and actors are increasingly experimenting in VR, a fast-growing new media landscape that the investment bank Citi last fall forecast will be a trillion-dollar industry by the year 2035. Jon Favreau (“Iron Man”) and Justin Lin (“Fast & Furious”) have tried their hand in it, and in May, “Birdman” director Alejandro Inarritu will premiere a virtual reality project at the Cannes Film Festival. He has called it an effort to “allow the visitor to go through a direct experience walking in the immigrants’ feet, under their skin, and into their hearts.”

Jennifer Brea turned to VR for an accompanying experience to her Sundance entry film, “Unrest,” about her battle with chronic fatigue syndrome. In the VR experience, the viewer feels what it’s like to be bedridden in her room. Brea calls virtual reality “an engine of empathy.”

A sense of growth was palpable at Tribeca, which increased the size of its VR arcade this year. Loren Hammonds, a film and experiential programmer at Tribeca, sees a rapidly progressing medium where artists are continually reexamining their notions of how to orient the viewer.

“The rules are being broken,” says Hammonds. “There are constantly these sets of rules that keep being presented to creators: you can’t move the camera or you can’t cut. And the minute someone breaks it and it works, well, no more rule.”

Creators, many eyeing the neighboring booths in the Tribeca arcade, acknowledge there’s a competitive atmosphere in VR that can feel like a land rush. Technology is one race, and all agree virtual reality is going to get exponentially smoother and crisper. “The Last Goodbye” has been “future-proofed,” meaning that more detailed photography and video has been set aside for when the tech catches up, says Patrick Milling Smith, chief executive of VR production company Here Be Dragons.

But storytelling is a race of its own in VR, a medium many call a combination of cinema and gaming. Should the viewer have agency to move and shape their experience? If so, to what degree? How do you guide them?

For inspiration, Baobab Studios co-founder Eric Darnell, an animation veteran who co-directed the “Madagascar” films, has studied how magicians manipulate the eyes of their audiences. Baobab’s first VR work, “Invasion!” supplied the viewer a partner — a little white bunny — for an alien arrival.

“Now everyone is doing that,” says Maureen Fan, chief executive of Baobab. “But a lot of people debated us on that. We felt that as a user, why are you there if you’re a fly (on the wall) verses if you’re a bunny? If you have a role to play, how much more do you feel for that character and feel immersed in that world?”

At Tribeca, Baobab premiered the first chapter of an ambitious multi-part series, “Rainbow Crow,” in which John Legend voices a mythical, sonorous bird forever changed by a cosmic adventure. “It’s about love. It’s about inclusion. It’s about community,” says Legend.

The creators of the choose-your-own-adventure, live-action “Broken Night” wanted to take go further. In it, Emily Mortimer plays a woman with a hazy memory recounting a violent encounter with an intruder in her home. At various points in the story, viewers are given a choice to follow different paths in the story, which they select by looking to one side of the action or the other.

“The problem with live-action VR today is it’s not interactive,” says co-director Tal Zubalsky. “Kind of the whole promise of VR is to get you to a different place. But if you get there only as an observer and not as a participant, then you’re not really there.”—AP