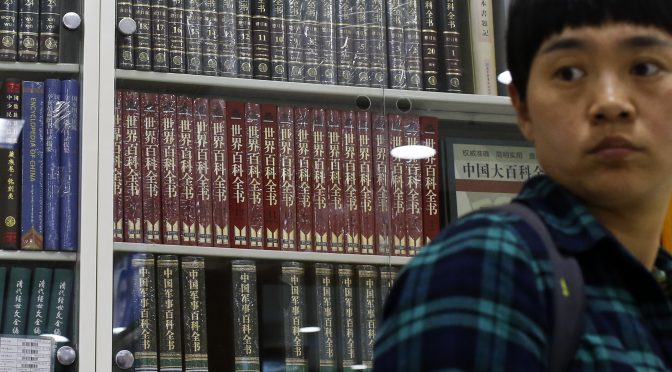 China is compiling a free online encyclopaedia to rival Wikipedia, but it will likely only give Beijing’s official version of sensitive historical events, and the public won’t be able to write or edit it.

Instead, scholars and experts hand-picked by Beijing say only they will be able to make entries — the latest example of the Chinese government’s efforts to control information available on the internet.

The scholars say truth is their guiding light, and their editing and review process is a rigorous one. If there is a difference of opinion, a committee should figure it out, said Zhang Baichun, chief editor of the history of science and technology section.

“Of course, science does not come from democratic votes, to convince others you will have to present the most convincing proof,” he told The Associated Press.

The effort to compile 300,000 entries that span science, literature, politics and history is being led by the ruling Communist Party’s central propaganda department, which guides public opinion through instructions to China’s media, internet companies and publishing industry as well as overseeing the education sector. They have instructed the Encyclopaedia of China Publishing House, known for its offline Chinese Encyclopaedia, to produce it.

The ruling party has struggled to manage public opinion in the internet age, when citizens can comment on news and topics of outrage and post photos of protests on social media — at least until such messages are scrubbed away or rendered unsearchable by censors. China also regularly blocks overseas sites including Facebook and Twitter, and has periodically blocked Wikipedia’s English and Chinese versions. Currently, the Chinese Wikipedia is inaccessible in the mainland.

Jiang Lijun, senior editor at the Encyclopaedia of China Publishing House, said they plan to have entries on political leaders, the history of the Communist Party, and subjects including virtual reality, artificial intelligence and the European Union.

The online Chinese Encyclopaedia will focus primarily on entries that are less likely to change as opposed to recent events, and with academic value, “while also trying to strike a balance between that, being timely and what people are searching for,” she said. She declined to comment on how events that are politically sensitive in China, like the Cultural Revolution and the 1989 Tiananmen Square crackdown, would be treated.

Qiao Mu, an independent media analyst in Beijing, said the Chinese Encyclopaedia would be “quite different” from Wikipedia because of the need to toe the line on political taboos.

“If it’s not blocked in China, the publisher must accept censorship, either self-censorship or censored by authorities,” he said.

He said the encyclopaedia would likely present a single, official version of sensitive historical events, and exclude items like the Tiananmen crackdown and the outlawed Falun Gong spiritual group, which “never exist on the internet.”

The publishing house behind the Chinese Encyclopaedia is paying 20,000 scholars and experts from universities and research institutes to write entries and it is slated to go online next year. Jiang said initially the encyclopaedia will just be in Chinese, but they are also doing research to see how viable an English version would be.

Jiang said they met with a team from San Francisco-based Wikipedia to learn from their experience.

Wikipedia is edited and maintained by hundreds of thousands of volunteers around the world, and has more than 40 million articles encompassing nearly 300 languages. More than 900,000 entries are in Chinese, compared with more than 5 million in English.

“There is Chinese content on Wikipedia too, but sometimes it is not as accurate as it could be,” said Jiang.

Jiang said that as Wikipedia’s content is generated by users, they can create more entries faster. “But we try to eliminate self-promotion and inaccuracy as much as possible.”

Zhang, the professor of history of science and technology, said the online version will make it easier to reach more people, particularly young readers.

To create the history of science and technology entries, Zhang said professors from the Chinese Academy of Sciences’ Institute of Natural Sciences first hold meetings with veterans and young experts in their fields to form a committee. The committee will then find the most authoritative person on the topic to write the draft, including sometimes foreign experts, said Zhang, who is director of the institute.

The draft is reviewed by a section chief editor and then the committee.

“If there is a difference of opinion, all deputy and chief editors should participate in the discussion and figure it out together,” Zhang said. “We will reason things out with the author until we reach an agreement, or change the author.”—AP