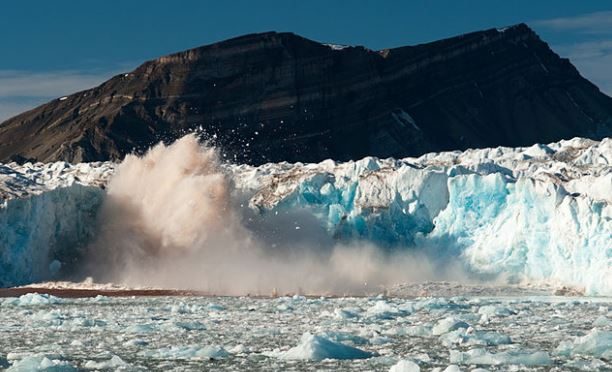 Using data from European Space Agency’s Sentinel-1 satellites, researchers have detected rapid acceleration of an Arctic glacier.The Negribreen glacier on Norway’s Spitsbergen island has recently seen a surge in ice surface speed, increasing from one metre to 13 metres a day over the winter, ESA said in a statement on Friday.

When a glacier ‘surges’ a large amount of ice flows to the end in an unusually short time.

While the surge causes in the Negribreen glacier are not completely understood, researchers believe that they could be linked to changes in the amount of heat or water in the lowest layers of the glaciers.

The last time Negribreen experienced a surge like this was in the 1930s, as documented in aerial photographs. At that time, it advanced almost 12 km into the fjord in one year along a 15 km-wide section of the front.

Since then the front of the glacier had been steadily retreating, with large icebergs breaking off.

This latest jump in speed began in July 2016 and has been climbing ever since – even over the cold winter months.

A team of scientists working under ESA’s Climate Change Initiative in the Glaciers_cci project are using satellite radar and optical coverage to map glaciers at different times and determine their changes in extent, elevation and speed.

“Sentinel-1 provides us with a near-realtime overview of glacier flow across the Arctic, remarkably augmenting our capacity to capture the evolution of glacier surges,” said Tazio Strozzi from Swiss company Gamma Remote Sensing and scientist on Glaciers_cci.

”This new information can be used to refine numerical models of glacier surging to help predict the temporal evolution of the contribution of Arctic glaciers to sea-level rise,” Strozzi said.