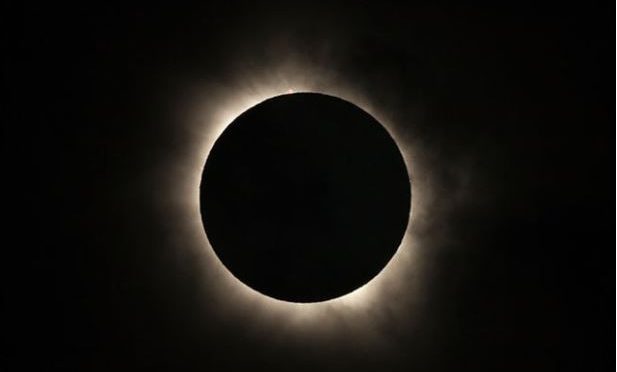 Using supercomputers, researchers have forecast how the corona of the sun—the aura of plasma that surrounds the sun and extends millions of kilometres into space—will look during the upcoming total solar eclipse on August 21.The total eclipse of the Sun, visible across the US, will trace out a 70-mile-wide band across 14 states.

“The Solar eclipse allows us to see levels of the solar corona not possible even with the most powerful telescopes and spacecraft,” said Niall Gaffney, Director of Data Intensive Computing at the Texas Advanced Computing Centre.

Beginning on July 28, the researchers from San Diego-based Predictive Science Inc. (PSI), used massive supercomputers, including Stampede2, Comet and Pleiades supercomputer, to complete a series of highly-detailed solar simulations timed to the moment of the eclipse.

The team used data collected by the Helioseismic and Magnetic Imager (HMI) aboard NASA’s Solar Dynamics Observatory (SDO), and a combination of magnetic field maps, solar rotation rates and cutting-edge mathematical models to identify how magnetohydrodynamics—or the interplay of electrically conducting fluids like plasmas and powerful magnetic field—impact the corona.

The researchers applied a wave turbulence-driven methodology to heat the corona, which helped better reproduce the underlying physical processes in the corona, and helped produce a more accurate eclipse prediction.

Furthermore, the simulations produced a coronal mass ejection—an unusually large release of plasma and magnetic fields from the solar corona—from an active region that will be near the east limb of the Sun on eclipse day—a tantalising possibility for eclipse watchers.

Completed on July 31, the computer simulations were converted into scientific visualisations that approximate what the human eye might see during the solar eclipse, the researchers said.

The results will be presented at the Solar Physics Division (SPD) meeting of the American Astronomical Society (AAS) in Oregon.

But beyond the moments of an eclipse the accurate predictions of space weather can potentially help authorities prevent the worst impacts of a powerful solar storm, the researchers noted.