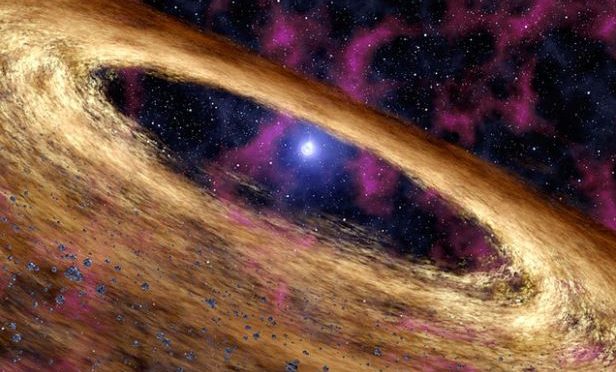 Astronomers have identified a pulsar spinning at more than 42,000 revolutions per minute, making it the second-fastest known.The new object, named PSR J0952-0607 — or J0952 for short—is classified as a millisecond pulsar and is located between 3,200 and 5,700 light-years away in the constellation Sextans.

The pulsar contains about 1.4 times the Sun’s mass and is orbited every 6.4 hours by a companion star that has been whittled away to less than 20 times the mass of the planet Jupiter, according to a study published online in the The Astrophysical Journal Letters.

The discovery was made with the Netherlands-based Low Frequency Array (LOFAR) radio telescope by following up on mysterious high-energy sources mapped out by NASA’s Fermi Gamma-ray Space Telescope.

“Roughly a third of the gamma-ray sources found by Fermi have not been detected at other wavelengths,” said Elizabeth Ferrara, a member of the discovery team at NASA’s Goddard Space Center in Greenbelt, Maryland.

”Many of these unassociated sources may be pulsars, but we often need follow-up from radio observatories to detect the pulses and prove it,” Ferrara added.

A pulsar is the core of a massive star that exploded as a supernova. In this stellar remnant, also called a neutron star, the equivalent mass of half a million Earths is crushed into a magnetised, spinning ball.

The rotating magnetic field powers beams of radio waves, visible light, X-rays and gamma rays. If a beam happens to sweep across Earth, astronomers observe regular pulses of emission and classify the object as a pulsar.

The LOFAR discovery also hints at the potential to find a new population of ultra-fast pulsars.

Perhaps pulsars with faster periods simply can’t form. But the gap between theory and observation may also result from the difficulty in detecting the fastest rotators.