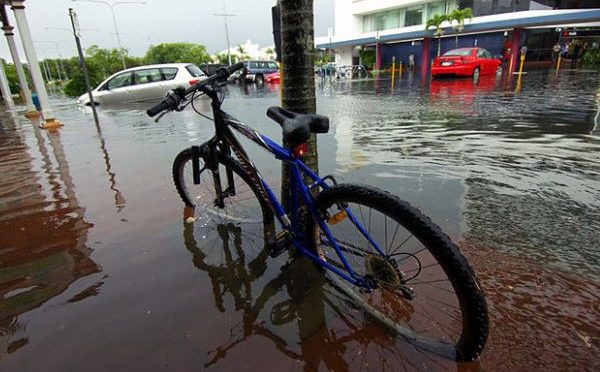 With heavy rains frequently bringing this tech hub to a halt, the Telangana government with the help of technology firms is developing an application to address the problem of urban flooding, a senior official said on Friday.
The application to be developed by next rainy season will help alert people in advance so that they can reorganize their commute and work.

The technology will be similar to the one already being tried to alert people on heat wave in the state. He claimed that the app had helped in reducing the number of deaths due to heat wave substantially. Based on the weather data available, the app issues the alert 15 days in advance.

Ranjan, who was at Hexagon Capability Centre India (HCCI) here, said these were among the innovative applications being developed under Digital Telangana programme in partnership with 20 companies including who’s who of the information technology sector.

He later told reporters that the state had partnered with IT giants like Microsoft, Google, Intel and IBM and also a few startups to develop the applications to bring change in people’s lives.

Under e-agriculture initiative, about 2,000 agriculture extension officers are giving scientific advise to farmers. The officers have been given tabs through which they monitor the health of the crops. The tabs get sensor based data about weather, moisture, soil humidity, soil alkalinity and also market information.

Another pilot connects e-health centres in villages to Nizam’s Institute of Medical Sciences (NIMS) in Hyderabad through telemedicine so that people in remote villages also get expert medical advise.

Telangana has set a goal of making one person in each of the 8.5 million households in the state digitally literate. The state has engaged Indian School of Business (ISB) to audit claims of digital literacy, defined as a person who can send a mail.

Ranjan was confident that the target of digital literacy will be achieved with broadband connectivity to all households in the state. The state is laying optic fibre cable across the state along with 150,000 km water pipelines being laid to supply drinking water to every household.

He also said the government was facilitating telecom companies to aggressively push 4G services in the state to achieve 100 per cent coverage.

Under Hy-Fi project, the government in partnership with telcos is creating 3,000 hotspots in Hyderabad. People at public places will get free service WiFi for some time and at nominal cost after the specified time. He said 1,500 locations were covered while the remaining will be covered in three months.

The government is also setting up digital kiosks at each of the 8,700 apanchayat’s to offer citizen services. So far 1,500 kiosks have already been created. All the centres will be managed by women entrepreneurs.