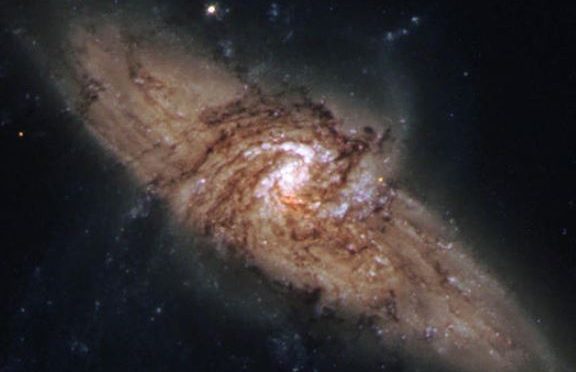 The galaxy NGC 1277, lies near the centre of the Perseus cluster of over 1,000 galaxies, located 240 million light-years away.

The findings, published in the journal Nature, showed that the relic galaxy has twice as many stars as our Milky Way, but physically it is as small as one quarter the size of our galaxy.

Essentially, NGC 1277 is in a state of “arrested development”.

Further, the scientists found that NGC 1277 does not have the same kinds of globular clusters that other large galaxies have.

This suggests that NGC 1277 never grew further by gobbling up surrounding galaxies.

“I’ve been studying globular clusters in galaxies for a long time, and this is the first time I’ve ever seen this,” said Michael Beasley, of the Instituto de Astrofisica de Canarias at the University of La Laguna, Spain.

NGC 1277 started its life with a bang long ago, ferociously churning out stars 1,000 times faster than seen in our own Milky Way today.

But it abruptly went quiescent as the baby boomer stars aged and grew ever redder.

The very rare and odd assemblage of stars has remained essentially unchanged for the past 10 billion years, scientists said.

In addition, NGC 1277 also has a central black hole that is much more massive than it should be for a galaxy of that size.

This reinforces the scenario that the supermassive black hole and dense hub of the galaxy grew simultaneously, but the galaxy’s stellar population stopped growing and expanding because it was starved of outside material, the study showed.

While Hubble has spotted relic galaxies before, but this one is by far the closest.

“We can explore such original galaxies in full detail and probe the conditions of the early universe,” said Ignacio Trujillo, from the varsity.

For the study, the team started looking for “arrested development” galaxies in the Sloan Digital Sky Survey and found 50 candidate massive compact galaxies.