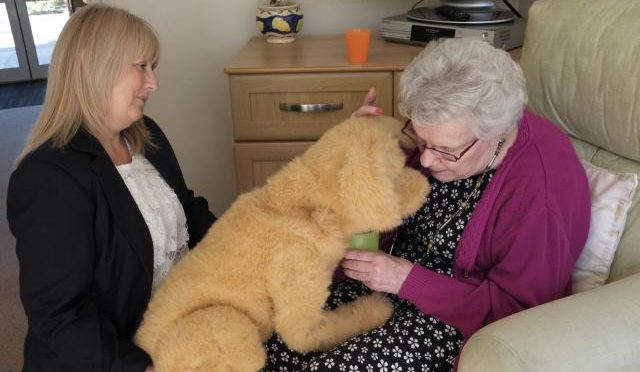 Among Ron Grantham’s happiest memories are the days he spent fly-fishing with his beloved dog, Spot. Now those memories are being revived by visits from his new best friend, Biscuit – a robotic dog.

Grantham is 99 years old and lives in Templeman House, a British care home, which brought in Biscuit. Staff there say dogs – even robotic dogs – can help to elicit memories from residents and spark conversations with care providers.

“I found out today that Ron used to go fly fishing when he finished work and take the dog across the fields with him while he fished,” said Deanna Barnes, home manager at care home, told Reuters. “We didn’t know that before. So obviously the dog brings out memories that they can reflect on and tell us.”

Biscuit stands around two feet tall and looks something like a labradoodle. He’s equipped with sensors in various places on its body that allow him to react when a human interacts with it.

Simon Bird, the deputy chief executive at Care South, which owns Templeman House and several other care homes in the south of England, said Biscuit was particularly effective at reducing stress and anxiety in residents with dementia.

“When we do have residents that are getting particularly stressed or very anxious, the manager or the staff will bring Biscuit out. He’s a good distraction. He reduces stress levels,” Bird said.

“He does stimulate memory and also encourages a lot of social interaction and recollection and reminiscence.”

Though Biscuit may ultimately be nothing more than a collection of plastic, wiring and sensors wrapped in synthetic fur, residents still have an emotional reaction to him.

As resident Elsie Proctor, 94, petted Biscuit, she told the dog “You’re beautiful. Yes, you are a beautiful one, yes, that’s lovely.”