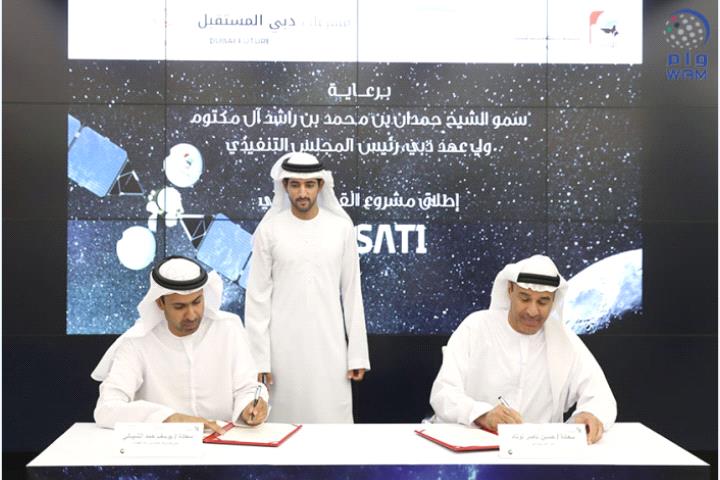 His remarks underline the agreement signed by MBRSC with Dubai Municipality to design and manufacture the first environmental nanometric satellite in the region in the UAE. The satellite, DM SAT1, was a project of the Dubai Future Accelerators program; it is designed to collect and analyse environmental data using space technology. The data will then be used to find solutions to the increasing pollution in cities as well as to address climate change.

“Anticipating the future and proactively planning for it is no longer an option,” Shaikh Hamdan added. “It is a necessity for cities and governments in our rapidly changing world. We are aware that to maintain our competitiveness on a global scale, we need to accelerate the pace of our achievements. With that in mind, we launched a number of platforms such as the Dubai Future Accelerators program, which consolidates the efforts of the government and private sectors to propose solutions for the challenges of the future, as Shaikh Mohammed bin Rashid directed.”

Shaikh Hamdan noted that the future-ready outlook has become – and within a short period of time – an engrained culture within government departments, turning these institutions into catalysts for creating economic opportunities and pioneering achievements not only in the region, but also in the entire world.

“Our leadership has taken a strategic outlook in the space sector, which has massive potential,” Shaikh Hamdan said, lauding the cooperation between the Dubai Municipality and the Mohammed bin Rashid Space Centre. It sets an example for other government and private institutions to collaborate with the space center to affect real change in people’s lives. “All that we have achieved so far is only the first few steps in our space strategy,” H.H. added.

Shaikh Hamdan noted that training and developing national human resources for the space sector is essential for the UAE’s plans to build the future. This partnership offers immense opportunities to build a competent national workforce that can support the UAE’s strategic objectives.

Eng. Hussain Nasser Lootah, Director-General of Dubai Municipality, and member of the Board of Trustees of Dubai Future Foundation, said that Dubai Municipality is committed to achieving the vision of  Shaikh Mohammed bin Rashid Al Maktoum, in redefining the role of the government agencies in driving innovation by leveraging the next generation of business and technology models, including space technology, which in turn enhances the nation’s competitiveness.

He said that the UAE and Dubai aims to be a global capital in setting future technologies through initiatives such as the Dubai Future Accelerators. It served as the platform for the first environmental satellite, DM SAT1. “Dubai Municipality is the first municipality in the region to adopt it marking a quantum leap in the field of environmental monitoring. The project will employ the latest environmental space technologies to monitor air pollutants and greenhouse gases that cause climate change as it threatens the sustainability of ecosystems and natural resources, as well as the health and safety of communities.”

Yousuf Alshaibani, Director-General of MBRSC, said that the space sector is a key driver of scientific research. “The creation of new channels for the application of space technology on the ground and in strategic sectors such as the environment would enhance the status of the UAE in the region and the world. It will also provide opportunities for the training of human resources and achieve long-term returns.”

He said that UAE, through its various entities, is building a universal model in using space technology to solve the most pressing development challenges, and highlighted the importance of the partnership with Dubai Municipality.

The agreement states that the center will design and manufacture the satellite according to the technical specifications and operational capabilities that enable it to carry out its tasks for monitoring and analysis of data.

The center will also provide necessary training for strengthening the technical capabilities of specialists in Dubai Municipality in the effective use of the satellite to monitor the environment, and to ensure the optimum use of information aim finding solutions to the challenges of climate change and others.

DM SAT1 is the first-of-its-kind in the region and has several unique features that represent the next generation capabilities of satellites, including coverage of large areas of land and sea, and its ability to turn around the Earth at a rate of 14 times during the same day, and same site monitoring more than once within a period of 3-5 days. The satellite is also equipped with 2 built-in computers for data analysis and storage, in addition to a very accurate GPS system.

DM SAT1 will provide data for monitoring sandstorms and other environment related activities, including aerosols and other factors affecting the climate as well as natural marine and wildlife reserves. The monitoring process is carried out through three spectral bands – blue, red and infrared. It is built to the highest standards of technology through close cooperation with the British Space Agency.—WAM