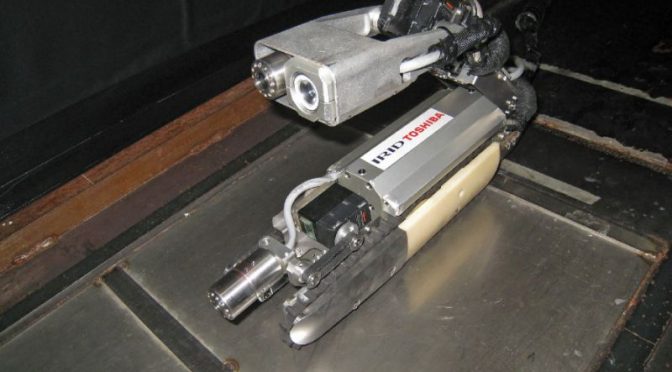 Japanese authorities on Thursday will send a robot inside the Fukushima nuclear plant to study its condition.

The scorpion-shaped robot will take photographs and measure the temperature and radiation levels inside the reactor’s containment vessel, said the Tokyo Electric Power Company (TEPCO) in a statement.

Last week, TEPCO recalled an earlier robot after it recorded radiation levels as high as 650 sieverts per hour, which could have damaged it, Efe news reported.

A dose of just one sievert per day can prove harmful for human beings and can cause death, which is why the estimated levels inside the reactors — capable of even damaging electronic devices — have made it impossible for human operators to access the reactor.

Reactors No. 1, 2 and 3 had suffered partial meltdowns due to an earthquake and a tsunami that hit Japan in March 2011.

Determining the exact condition of the nuclear fuel rods in the reactors is key to understanding how they can be managed and dismantled.

TEPCO technicians believe there is enough melted fuel in No. 2 reactor to perforate the pressure vessel and accumulate at the bottom of the containment vessel.

The photographs taken by the robot will help the company evaluate the reactor’s condition and identify the exact location of the fuel, which will further help in developing a new technology capable of dismantling it.

The high radiation levels pose new obstacles for the removal of these nuclear fuel rods, necessary for the process of dismantling the reactor, which is expected to take around 30 to 40 years.

The Fukushima incident is the worst nuclear accident since the Chernobyl disaster in 1986.—IANS