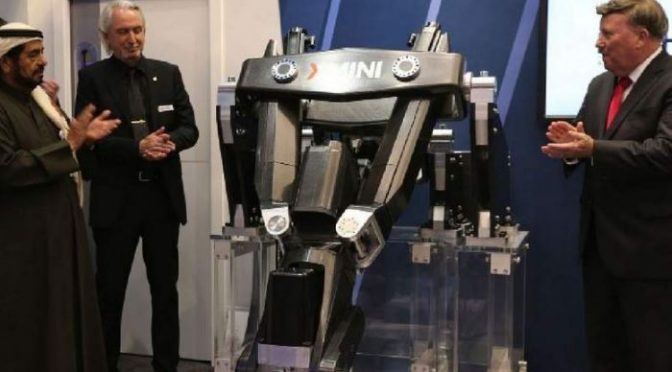 A locally-manufactured next-generation portable machine will soon be exported to other countries to support various industries including aerospace, automotive, defence and oil and gas.

The robotic portable machine called XMini was produced by a joint venture company composed of Abu Dhabi-based Injaz National, US aerospace company Lockheed Martin, and Sweden-based Tecgrant AB. This was announced by Exechon LLC, the joint-venture company, on the sidelines of the International Defence Exhibition and Conference (Idex) 2017 in Abu Dhabi on Monday.

It is basically a machine tool that can do cutting, treading, shaping and all kinds of machine works applicable to automotive, aerospace, defence and oil and gas industries. But the big difference is it is portable,” Stan Ramirez, Lockheed Martin International vice president for Industrial Participation and Offsets, explained to Khaleej Times.

“It (XMini) can do the same functions what large machines do but it allows you flexibility and mobility, unlike fixed machines,” Ramirez underlined.

Ramirez said they have already received several orders from an aerospace company but he declined to reveal the market price “because it is still being worked out as there are many competitors out there.”

“The low-rate production will start this summer and we will move up very quickly thereafter. We will also build up our facility to handle the production,” he added.

Ramirez also said that they are setting up an apprenticeship program at the Masdar Institute to develop Emirati talents and to accelerate the expansion of industrial automation and robotics manufacturing in the region.

Rick Edwards, executive vice president of Lockheed Martin Missiles and Fire Control, added: “We are excited to celebrate this milestone in the partnership with local experts to develop the XMini, which will enhance local manufacturing capabilities and create long-term economic benefits. The XMini reflects Lockheed Martin’s commitment to supporting the UAE’s goal of becoming the leading supplier of cutting-edge, automated manufacturing technology.”