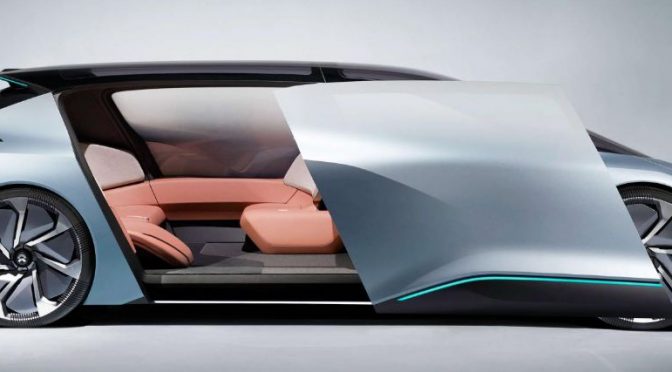 A “global startup” which makes electric racing vehicles unveiled plans Friday to sell a fully autonomous electric car in the US market by 2020.

The company called Nio, founded by Chinese entrepreneur William Li and with offices in Silicon Valley, Europe and China, unveiled a prototype of the vehicle called Eve at the South by Southwest tech conference in Austin, Texas.

According to a Nio statement, the car will be “a digital companion, a robot on wheels” equipped with “an artificial intelligence engine with an intuitive human interface, providing verbal and visual connections both within the vehicle and with the outside world.”

It will use its glass panels as “an augmented vision for occupants and for new kinds of entertainment,” according to the company statement.

The new car is likely to compete in the premium segment with vehicles from Tesla and others, including another Chinese-funded startup, Faraday Future, as automakers ramp up efforts to deliver autonomous driving.

“We’re excited about having autonomous electric cars for US consumers in 2020,” said Padmasree Warrior, chief executive of US division and a former executive at Cisco and Motorola.

“Today we also unveiled our vision for the car of the future, focused on delivering unmatched user experience through leading edge, software defined hardware.”

According to its statement, Nio has more than 2,000 employees in various locations around the world and has an autonomous vehicle testing permit for California.

Kris Tomasson, Nio’s vice president for design, told AFP the company expected to have the first fully autonomous vehicle in the US market.

“We have a startup mentality,” he said. “We are using the advantages of being nimble, and we don’t have a lof of the legacy issues of traditional manufacturers.”

While some details will depend on US regulations, Tomasson said the vehicle will be designed as “a living space” for up to six passengers, but may allow for a driver.

“We are trying to bring people a joyful lifestyle, and we want to create consumer engagement from all aspects,” we said.

“We want to create a holistic user experience.”

Tomasson said he expected the car to be capable of “level 4” autonomy, or the highest level designated for self-driving.

Another model, without full autonomy, wis set to be introduced in China in 2018, he said.

Tomasson said he did not have details on pricing or the driving range between charges of the new vehicle, or where it would be manufactured.—AFP