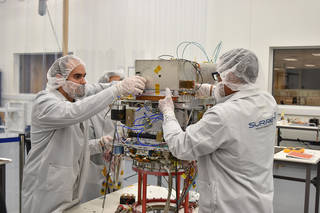 In a key advance for safely navigating future human exploration of the solar system, NASA said it is set to send its next-generation atomic clock to space in late 2017.

This clock will be smaller, lighter and magnitudes more precise than any atomic clock flown in space before, NASA said.

Engineers at NASA’s Jet Propulsion Laboratory in Pasadena, California have completed integration of the instrument, the Deep Space Atomic Clock, with the spacecraft that will take it into orbit later in 2017, the US space agency said in a statement on Tuesday.

Timekeeping plays a critical role in spacecraft navigation and will be especially important for future deep space missions.

Most spacecraft are tracked using “two-way” methods — the ground-based antenna ‘pings’ the spacecraft and waits for the signal to return.

By measuring how long the signal takes to travel, the distance to the spacecraft can be calculated.

A navigation team then processes this information to determine the spacecraft’s flight path and also determine if any course corrections are required.

The next-generation atomic clock developed by NASA enables “one-way” tracking, where the spacecraft does not need to send the signal back to Earth.

The tracking measurements could be taken onboard and processed with a spacecraft-based navigation system to determine the path and whether any manoeuvre are needed to stay on course.

This will be a key advance for safely navigating future human exploration of the solar system by providing astronauts with their position and velocity when they need it, according to NASA.

It will lighten the load on the antennas in NASA’s Deep Space Network, allowing more spacecraft to be tracked with a single antenna.

The Deep Space Atomic Clock would also improve the precision and quantity of the radio data used by scientists for determining a planet’s gravity field and probing its atmosphere, NASA said.—IANS