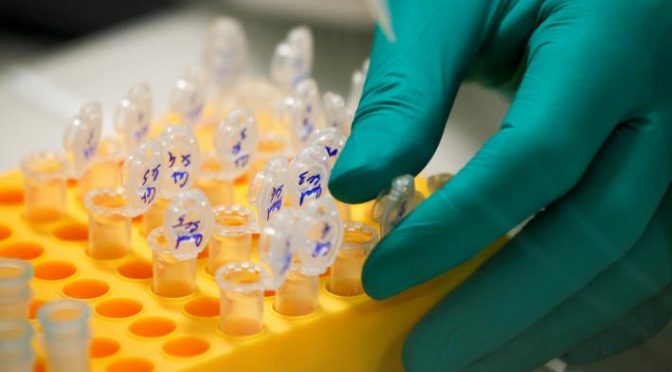 Scientists are getting closer to building life from scratch and technology pioneers are taking notice, with record sums moving into a field that could deliver novel drugs, materials, chemicals and even perfumes.

Despite ethical and safety concerns, investors are attracted by synthetic biology’s wide market potential and the plummeting cost of DNA synthesis, which is industrialising the writing of the genetic code that determines how organisms function.

Matt Ocko, a Silicon Valley venture capitalist whose past investments include Facebook, Uber and Zynga , believes the emerging industry has passed the “epiphany” moment needed to prove it can deliver economic value.

“Synthetic biology companies are now becoming more like the disruptive, industrial-scale value propositions that define any technology business,” he said.

“The things that sustain and accelerate this industry are today more effective, lower cost, more precise and more repeatable. That makes it easier to extract disruptive value.”

Ocko, whose Data Collective firm has invested in companies including organism design firm Gingko Bioworks and bioengineer Zymergen, is not alone.

Experts meeting in London this week said the science toolkit was improving fast and the cost of synthesising DNA was now 100 times cheaper than in 2003, although uncertainties remain about regulation and the public’s appetite for tinkering with life.

The global conference hosted by Imperial College London, bringing together scientists and money people, comes four weeks after researchers announced they were close to building a complete artificial genome for baker’s yeast.

This ambitious project has brought complex artificial life a big step closer because yeast is a eukaryote, an organism whose cells contain a nucleus, just like human cells.

The yeast work shows how DNA can be manipulated on a large scale, with genetic code increasingly treated like a programming language in which binary 1s and 0s are replaced by DNA’s four chemical building blocks, abbreviated as A, T, G, C.

A growing emphasis on computing is closing the gap between biology and traditional tech, even though this is an area that remains unpredictable, variable and complex.

“The intersection of biology and technology is a difficult place to be because of different cultures and languages, but I think we are breaking through some of those barriers,” said Thomas Bostick, former head of the U.S. Army Corps of Engineers who now leads biotech firm Intrexon’s environment unit.

The idea that engineering life can be broken down into data and coding is part of the appeal for tech investors.

“DNA is seen as the next programmable matter and that is what a lot of the Silicon Valley investors are excited about,” said John Cumbers, founder of synthetic biology network SynBioBeta.

“They’ve witnessed the power of software over the last 25 years and they are looking for the next big thing.”

Data from SynBioBeta shows a record $1.21 billion was invested in the sector worldwide in 2016, a threefold increase from five years earlier, while the number of firms in the sector has almost doubled to 411. For a graphic see http://tmsnrt.rs/2n3VYuO

A range of companies are springing up, from those producing new chemicals for industry to providers of DNA synthesis and related software, like U.S.-based Twist Bioscience and Britain’s Synthace.

Work is also advancing by leaps and bounds in the complementary area of gene editing now being embraced by many of the world’s top drugmakers.

The current product focus represents a change of tack from the first widely tipped application of synthetic biology in making biofuels from engineered algae.

In the event, algal biofuel proved a lot harder to scale up than expected and a tumbling oil price during the Great Recession of the late 2000s undercut the business model.

Drew Endy of Stanford University believes the case for using synthetic biology to take on gasoline never stacked up.

“Why would you bank your whole platform on a bulk high-volume, low-price, low-margin product? It’s baffling, not strategic,” he said.

Today’s synbio firms are looking at more niche and expensive products, such as potent painkillers and cancer medicines made in yeast cells – or fabrics with novel properties, although some have only reached demonstration stage.

Boston-based Gingko Bioworks, meanwhile, is developing a rose oil for French fragrance house Robertet and Switzerland’s Evolva has developed a vanillin, or vanilla extract, that, unlike most vanilla flavouring, is not made from petrochemicals.

In some areas – especially anything to do with food or the environment – synthetic biology is already running into criticism. Friends of the Earth was quick to condemn the new yeast-derived vanillin as “extreme” genetic engineering.

Other controversies appear inevitable as synthetic biologists push the envelope with more extreme projects, such as a Harvard team’s “Jurassic Park”-style proposal to resurrect the woolly mammoth by adapting the Asian elephant genome.

Intrexon’s Bostick, whose firm is releasing millions of genetically manipulated mosquitoes in Brazil in a bid to slash populations of Zika-carrying insects, believes each synthetic biology scheme has to prove its benefits outweigh the risks.

“There are always pros and cons, and we owe people a fair and balanced assessment.”—Reuters