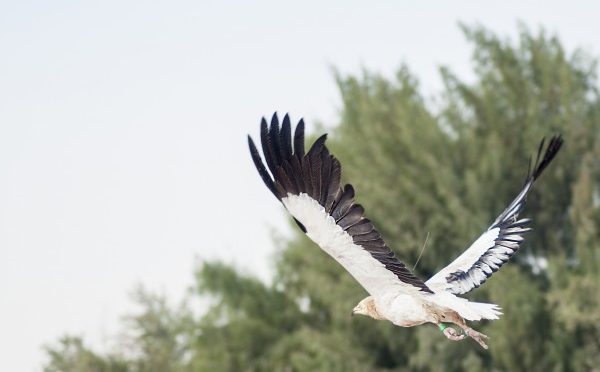 Two of four Egyptian Vultures tagged with satellite transmitters by the Environment Agency – Abu Dhabi, EAD, in 2016, have stayed in Jebel Hafeet while the two other birds moved to Northwest Oman where they continued to move around Ibri.

EAD has been regularly monitoring the population of Egyptian Vultures in and around Jebel Hafeet, the only place that they have been sighted in the emirate. The nearest population can be found on Al Masirah Island in Oman, where there are up to 50-75 breeding pairs. Other populations are scarcely spread out in Yemen and Saudi Arabia.

To further understand their status in the emirate and UAE and to determine their use of habitat, EAD started satellite tracking in 2014-2015. Globally, vultures face serious issues due to poisoning related mortality. Some vulture populations in Asia have crashed with over a 90 percent decline. Similar trends are being observed in Africa due to large-scale poisoning.

Dr. Shaikha Salem Al Dhaheri, EAD’s Executive Director of the Terrestrial and Marine Biodiversity sector, said, “The monitoring of locally important and globally threatened species is part of our effort to understand the distribution and population trends of such species.”

“We expect that the satellite tracking of Egyptian Vultures will provide interesting information on the species and possibly help us find breeding grounds of this species on Jebel Hafeet,” said Dr. Salim Javed, Acting Director of the Terrestrial Biodiversity Division at EAD.

“A Multi-species Action Plan, MSAP, for vultures in Europe, Asia, and Middle East and Africa is being developed and a series of workshops under the Conservation of Migratory Species, CMS, are planned over next few months. The data collected from Abu Dhabi and the UAE as a whole will feed into an action planning process,” he added.—WAM