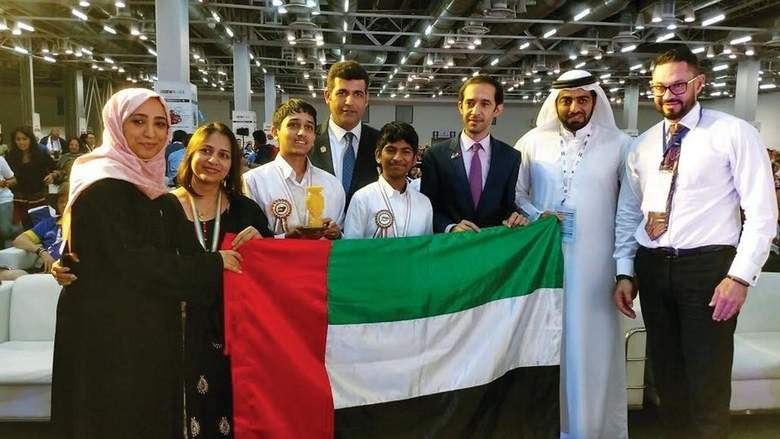 With the UAE promoting and celebrating the innovation culture in all spheres, Dubai students are not leaving any stone unturned on their level. Two students of The Millennium School, Dubai, have bagged the third prize at the World Robotics Olympiad for their innovative solutions using robotics technology to Rap the Scrap, i.e. to reduce, manage and recycle waste.

The project called ‘Terra Nova’ was made by students Arjun Bhorkar of grade 10 and Aaron Shabu of grade 8 – under the guidance of coach Sharo buin Bhorkar – and won the prize in the Junior High Open Category at the World Robotics Olympiad held in New Delhi, India on November 27, 2016

The robot that collects bio-medical waste, has a fool-proof segregation mechanism that helps in recycling and management of waste and then safely stores and transports the waste autonomously without any human interaction.

The robot also had the capability to interact with humans by detecting them via inbuilt sensors. Security can also monitor the robot through a 24 hour surveillance mechanism which is integrated into the system.

WRO 2016 was jointly organized by India STEM Foundation and National Council of Science Museums (NCSM) with this year’s theme being ‘Rap the Scrap’. The Olympiad started in Asia but now has participants from countries around the world including the Middle East, Europe, Africa, South America, North America and Australia.

Teams were required to think of a real world problem related to the theme and come up with an innovative solution for the same. The research and projects required to be well supported with all kinds of displays/prototypes/models/videos and presented in their 2m by 2m booth provided at the regional championship.

“It was an electrifying experience and a tougher competition as compared to the prior years, we had eight rounds of judging and I was optimistic about the results. We appreciate all the support given to us by our families, our school and the UAE National Robotics Organisers for helping us in overcoming the challenges we faced and for believing in us,” Arjun Bhorkar said.

The judges praised the team’s solution for being creative as well as for being a robot that can bring about a social change to do good at a community level and considered it to be a fascinating, socially good startup with a potential to change the world.

“This was my first experience and I was nervous initially, however with each round of judging I gained confidence. I enjoyed interacting with students of my age from around the world, with similar interest. I did not expect to win and I am so happy to have participated in this competition,”  Aaron Shabu.

Executive Principal of The Millennium School, Michael Guzder said: “If you’re passionate about something and you’re determined to succeed, then you can take on the world. We are extremely proud of our Robotics Team who have continually done well with their innovative creations, once again on the international arena where they have showed their class.”