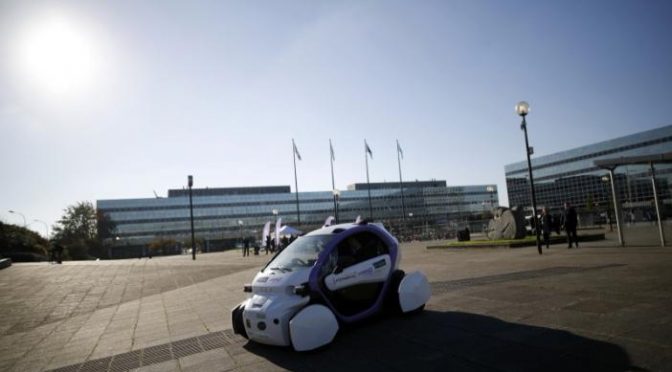 But the new technology also threatens millions of jobs and raises a slew of ethical dilemmas — prospects that were on the minds of business chiefs and politicians meeting at the World Economic Forum this week.

“The reality is we can’t just keep our head in the sand like an ostrich,” she told AFP in Davos, singling out the coming impact on employment.

In the United States alone, an estimated four million people work as truckers, taxi drivers and in other jobs that are under threat when the driverless vehicles come into widespread use — a matter of years, experts predict.

In October, delivery drivers got an uncomfortable glimpse of the future when a self-driving truck built by Uber’s Otto unit successfully delivered a beer shipment.

Cars with some autonomous functions — such as the ability to adjust the speed — are already on our roads, and more than a dozen automakers including BMW, Kia, Volkswagen and General Motors are racing to get fully self-driving cars to market by 2020.

Champions of the technology point to its potential to reduce the 1.3 million road deaths worldwide each year — too many of them at the hands of a tired or distracted driver, or one who simply did not react fast enough.

The auto industry is already changing fast thanks to the advent of services like Uber and electric vehicles, and carmakers are eyeing both the threats and opportunities.

Renault-Nissan chief Carlos Ghosn summed up the transformations as a “reshuffling of the cards” for the industry.

“There is a new game, let’s see who is going to be able to prevail,” he told an audience in Davos.

The dash for driverless technology is bringing new players into the car business, notably Google, Apple and BlackBerry.

The disruption will create jobs too — engineering posts and roles in any number of new services. There is talk of mobile doctors’ surgeries and moving nail salons.

But the transition will be painful, not least because most cabbies and truck drivers are not qualified to slide seamlessly into new engineering roles.

“We don’t have, at this point, really well designed (plans) for re-education,” said EU transport commissioner Violeta Bulc at a panel in Davos.

“All this massive change that has not been experienced before, because digitalisation is really making dramatic shifts.”

How to regulate the new vehicles is already giving a headache to authorities around the world.

Inga Beale, CEO of the Lloyd’s of London insurance market, said in Davos that insurers were having to grapple with the question of liability in case of an accident.

The US government unveiled a regulatory framework in September, but the carmakers are having to deal with ethical and legal dilemmas too.

At the extreme end, if an intelligent car is faced with the terrible choice of killing one person to swerve around a crowd of five, what should it do?

There was some relief for the industry when the US government this week found no safety-related defect in a fatal crash involving a Tesla car on autopilot last May.

In public, auto bosses are focusing on the ways that going driverless is going to change our lives for the better.

Ghosn painted a picture of a world where we are liberated not only to check our emails or watch TV while in the driver’s seat, but also run an entire office on the move.

“You can be in the car and do everything you’re doing in the house or in the office — except that it’s mobile,” he enthused.

Eventually, automated transport systems and innovations such as shared car ownership could free up our congested cities and clean up our air, promoters say.

For now, the approach is safety-first: the beer-delivering Uber truck had a human watching from the cabin, and a police car in tow.—AFP