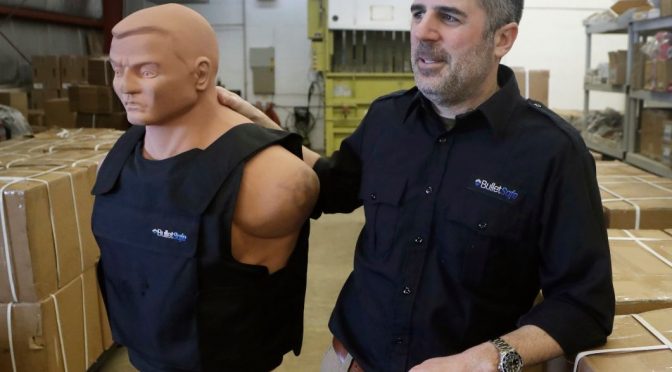 Melons going splat in slow motion. Drawn-as-you-go animation about machines. A behind-the-scenes look at winery operations. Not the usual viral videos, but small business owners have realized offering something to watch and having a sense of humor about themselves can help grab customers’ attention.

In more than a hundred videos he’s posted on YouTube, Tom Nardone takes aim at racks of ribs, laptop computers and tires to illustrate what a bulletproof vest can do. A Valentine’s Day-timed video sacrificed several boxes of candy. The videos can be graphic, with items exploding at slow speed and Nardone splattered with barbecue sauce or peanut butter.

Nardone, owner of Troy, Michigan-based PriveCo, began making the videos in 2013, less than a year after he began selling the vests. While he advertised in magazines and went to gun shows, he realized that to reach a wider audience he needed to be online. And he didn’t want a demonstration of just the vests.

“It does its job, but it’s nothing to look at,” Nardone says. “We said, uh oh, we’ve got to come up with something good.”

PriveCo’s videos have collected a following; the melon video has nearly a million views since it was posted more than 2½ years ago. Nardone gets recognized at gun shows, and has gotten compliments from people who like to watch him shoot items from gravel to boxed wine.

It’s natural for some small businesses like real estate brokers to use videos in marketing campaigns for houses and other properties; for others, it can take some brainstorming and perhaps even an offbeat sense of humor to come up with something compelling. But more businesses are getting on board — Facebook counted more than 3 million small business videos posted in September, up 50 percent from 2 million six months earlier, according to the company’s most recent published figures.

Arlington Machinery, which sells, repairs and appraises used plastic-making machines, began posting videos on YouTube nine years ago with several objectives. One was to raise the company’s rank in internet search results, and another was to display machines for prospective buyers. Or, if equipment was sent to the company for repair, videos could show the owners that the machines were ready to be sent back.

But more recently, Arlington realized videos were also a way to market itself to different kinds of customers. The Elk Grove, Illinois-based company decided to have a little fun, and commissioned the whimsical animated video that explains the company’s services.

“Used machinery is not all that exciting to most people,” says David Pietig, a general manager at the company. “What we’re trying to do is make people interested in what we do.”

Thinking about what customers want to see is the best way to get inspired, marketing experts say.

“Good ideas can come from everywhere. If there is an old-school mentality at a company, they should get a pool of 21-year-olds that are more digitally and socially media savvy,” suggests Brian Metcalf, CEO of GreenRoom, a digital marketing company based in Miami.

Making videos can cost almost nothing or run into the tens of thousands of dollars. Arlington Machinery says its animation cost only about $100, but Nardone paid more than $15,000 to produce a series of videos last summer. At Mountain View Vineyard, a Pennsylvania winery that began making videos in the past year, a smartphone and a still camera have kept the costs minimal.

When marketing director Laurie Monteforte started working at Mountain View a year ago, she made it a priority to create a campaign that included videos. But the standard way of selling wine — showing smiling people gathered around a food-laden table and lifting their glasses in a toast — won’t work in a video, she says.

“Today’s audience doesn’t want commercials, where we try to sell you something,” Monteforte says.

Mountain View’s videos teach viewers how to make something with wine, such as red wine hot chocolate, or show some aspect of the winery’s operations. Last summer, owner Linda Rice demonstrated how she hand-picks Japanese beetles off of plants and drops them into soapy water, killing them without chemical pesticides.

Mountain View says its revenue is up about 30 percent in the past year, and credits about three-quarters of that gain to video and social media.

“There are so many options where people can go for wine and spirits,” Rice says. “Video and social media set us apart because people get to know us.”—AP