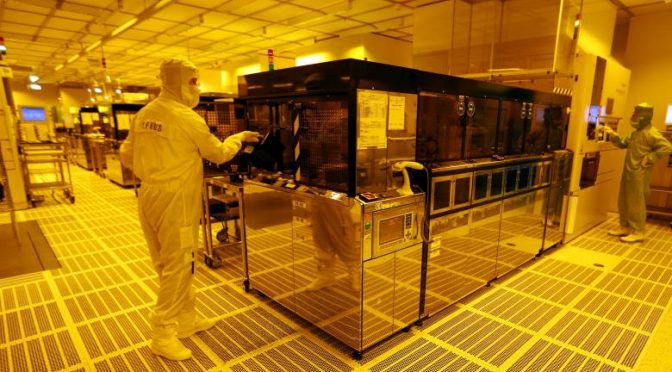 It’s not banking or mining shares, but rather technology stocks, that have come up trumps in Europe this year and are poised to end the first quarter as the best-performing sector.

European tech companies often pale in comparison to the glamour of peers across the pond such as Facebook, Snap Inc and Amazon, and are dwarfed in terms of market value. The U.S. sector, at $4.3 trillion, is worth more than eight times Europe’s.

Investors, however, have been quietly buying into a European industry they see as being at the heart of disruptive digital developments across a slew of sectors.

Tech stocks in Europe have risen nearly 12 percent in the first quarter, outstripping the broader market, which is up 4.8 percent, and also their performance in the first three months of last year when they fell 5.4 percent.

Driverless cars, iris-scanning technology and augmented reality are just a handful of the themes at play globally in which European companies such as STMicroelectronics, Infineon Technologies and SAP are involved.

Many European software firms are involved in corporate back-offices, keeping systems efficient and running – a less headline-grabbing side of the tech sector but one that can be important for companies across all industries looking to cut costs.

“Every consumer is exposed to Google, or Facebook, or Twitter … something like SAP, which actually is in most corporations, is less visible to the end consumer,” said Marcus Morris-Eyton, European equities portfolio manager at Allianz Global Investors. Tech now accounts for nearly a quarter of Morris-Eyton’s portfolio, and SAP is his biggest position.

The mining sector was the standout performer in Europe over the course of 2016, gaining 61.9 percent, followed by oil stocks which rose 22.9 percent – far ahead of technology firm shares which were up 3.4 percent.

Banking stocks endured a turbulent first half, dragged down by problems in the Italian sector, but after hitting a low in July they rallied almost 47 percent to the end of the year.

These trends were expected to continue into 2017, but so far banks are only up 4.6 percent in the first quarter, miners are up 6.2 percent and oil stocks are down more than 3 percent.

Like many sectors, the commodities and financial industries have since last week been hit by investor concerns that U.S. President Donald Trump may not be able to deliver on all his tax and infrastructure pledges, after his healthcare plans were blocked.

Tech is less exposed to immediate political and economic developments, according to analysts, and are more governed by long-term global trends in technologies such as automation, driverless cars and augmented reality.

Flows into tech have been strong globally, with tech sector-focused funds seeing the biggest inflows year-to-date since 2009, according to data from Bank of America Merrill Lynch.

The move towards digitization across industries has market participants particularly excited.

Morgan Stanley analysts highlighted SAP’s S/4 HANA enterprise cloud software which helps integrate data and applications, and also its new product line for the “internet of things” (IOT) – where everyday objects are connected to networks to send and receive data.

At Evenlode, one of Britain’s best-performing investment funds last year, portfolio manager Hugh Yarrow holds stocks such as Sage and Relx whose digital analytics are being increasingly used in law, accountancy and finance.

In more traditional sectors of tech, chip makers such as Infineon, STMicroelectronics and ASML are closely linked to Apple and the iPhone cycle. Infineon shares have surged to a record high.

Stuart Mitchell, manager of the SWMC European Fund at S.W. Mitchell, is betting big on STMicro. The stock, up 33 percent this year, is the fund’s biggest holding.

Mitchell said that he became interested in the stock when its share price fell after its loss-making set-top boxes business went belly up last year.

He reckons STMicro’s role in the auto industry with its car chip business and time of flight (TOF) technology – which is used in sensors – means it will surprise with its quick growth.

“The tech industry in Europe may not be as big in terms of revenue … as the U.S. is, but it has a critical role to play in basically what is, without doubt, a digital revolution that is global in nature,” he said.—Reuters