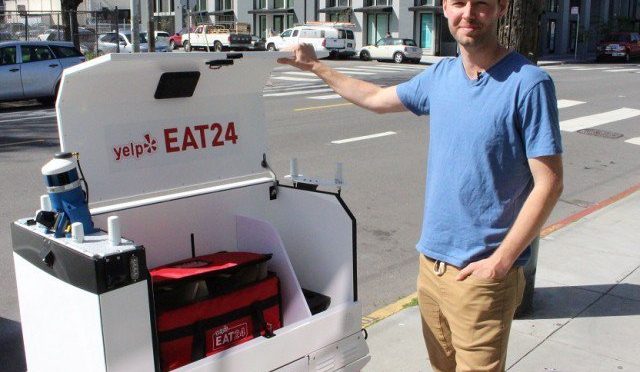 San Francisco startup Marble on Wednesday began giving its home town a taste of restaurant orders delivered by robot, confident that appetite for such service will grow around the world.

“It’s the real deal,” Marble co-founder and chief Matthew Delaney told AFP while providing a demonstration of one of the robots at the startup’s offices in Portrero Hill.

“On select evenings, you might be getting a text message in the middle of your Yelp Eat24 order asking if you would like it delivered by robot.”

Marble is starting with a “handful” of robots and keeping it opt-in when it comes to whether machines handle deliveries.

Marble robots, the current generation named “Happy” and numbered, roll along sidewalks and cross streets at walking speeds, relying on lasers, cameras and other sensors to maneuver.

The technology involved is similar to that used in self-driving cars.

“This allows us to have the most intelligent and reliable robot that really knows its environment and is a bit socially aware so that it can have the right etiquette on the sidewalk and get around,” Delaney said of combining sensors and maps.

Marble robots were designed to get around on their own, but they will have human escorts during the roll-out. Robots are also wirelessly linked to operators who, from Marble’s office, virtually ride along.

“We have basically eyes and ears there,” Delaney said.

“Operators can jump in at any time.”

He described the robot cargo compartment as being as safe as a typical car trunk. When robots arrive with food orders, customers get text messages containing codes to enter on key pads to unlock lids.

Marble robots are built by the startup, which would not disclose how much they cost. A revenue model had yet to be put in place. The delivery service launched Wednesday was described as a step on the path to perfecting the robots.

“Our long term goal is to drive down costs; make this something that is useful in every city across the globe for those kinds of neighborhood-centric deliveries,” Delaney said.

Marble saw ground delivery robots as filling a need for quick, inexpensive neighborhood deliveries in cities or other urban settings, freeing humans to tend to long drives or large orders.

Rules regarding robots on sidewalks are still in flux and the startup is working with local regulators and community groups, according to Marble.

“With the rapid growth of the on-demand and e-commerce markets, solving the last mile delivery problem is incredibly important,” Eclipse general partner Greg Reichow said in a released statement.

The funding will be used to continue developing the Marble robot fleet and expand service, according to the startup.

They also developed autonomous space robots and moon landers to compete in competitions such as the Google Lunar XPrize.