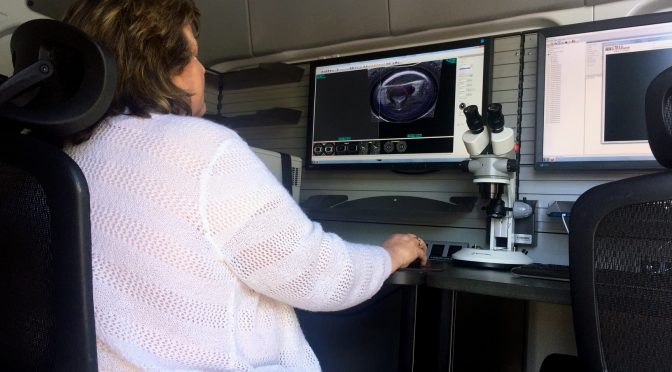 National officials rolled out a new van Tuesday that will enable detectives to test-fire weapons and rapidly analyze bullets and shell casings recovered at crime scenes rather than sending them to labs and waiting days for results.

The first stop for the National Integrated Ballistics Information Network van is Baltimore, where the number of homicides so far this year is the second-highest the city has ever recorded.

The mobile ballistics van launched by the Bureau of Alcohol, Tobacco, Firearms and Explosives functions as a forensic lab, and also has a trailer on the back where detectives can test-fire the weapons.

Analysis that used to take days will now take hours, according to Daniel Board, Special Agent in Charge of the bureau’s Baltimore Field Division. That means agents, detectives and officers can more quickly identify repeat offenders, and build cases to put them behind bars.

“Instead of an offender being arrested for a firearm and being released before we can ever figure out what else that firearm or that person has done, we’ll have that lead in hand before they have the opportunity to make bond,” Board said.

Baltimore has struggled to get its homicide rate under control since the bloodshed began to skyrocket in the spring of 2015, following the death of 25-year-old Freddie Gray in police custody and the civil unrest it prompted. That year, Baltimore saw 344 homicides, and last year the city recorded 318. In the first four months of this year, the city saw 108 homicides— more than any other year except for 1993, when 110 people were killed in the same time span. However, the city’s population now is significantly smaller than it was then, making the rate of killing higher.

“This challenge is bigger than all of us and we needed the federal assistance,” said Baltimore Mayor Catherine Pugh. The van, she said, “will allow for comprehensive collection, an entree of ballistic evidence, timely turnaround and investigative follow up and prosecution, linking otherwise unassociated crimes, giving investigators a better chance to identify and arrest shooters before they reoffend.”

The van will spend about a month in Baltimore before moving on to Chicago, where last year’s murder rate was the deadliest in nearly two decades. So far this year it has recorded 183 murders, compared to 182 for the same time period last year.—AP