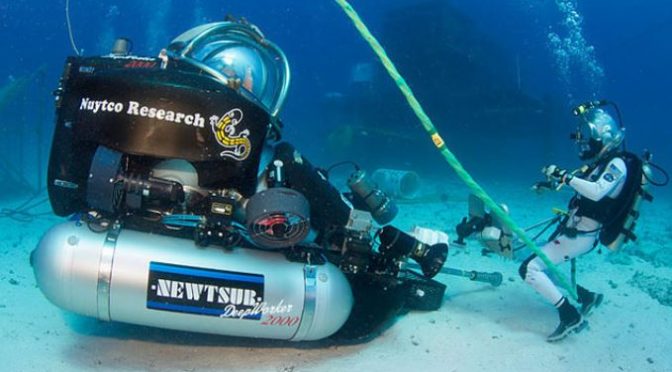 As NASA plans to launch a real submarine into Titan seas in the next 20 years, researchers at Washington State University have re-created an alien ocean in a laboratory.The results of the research, published in the journal Fluid Phase Equilibria, could provide clues to how a submarine might work in Titan-like conditions when the temperature drops to minus 184 degrees Celsius and the ocean is made of methane and ethane.

Titan is the largest of Saturn’s many moons and the second-largest in the solar system.

It is of particular interest to researchers because it is similar to Earth in one important way—it holds liquid.

The Titanian seas, however, are not composed of water, like Earth’s seas, but are seas of liquid hydrocarbons.

The submarine that NASA is designing will have to operate autonomously. It will need to study atmospheric and ocean conditions, move around sea beds, and hover at or below the surface.

The engineering is even trickier because, unlike the nearly homogeneous water in Earth-based oceans, the concentration of ethane and methane can vary dramatically in the Titan oceans and change the liquid’s density properties.

“You have to come up with creative solutions,” said Richardson, who earlier re-created the atmosphere of Titan and tested how a small heated machine might work under such conditions.

He was Washington State University’s first-ever recipient of a NASA Space Technology Research Fellowship, which included an internship at NASA’s Glenn Research Center in Cleveland, Ohio.

It was while working as an intern on a separate problem that a NASA scientist approached him with the issue of designing a submarine for Titan.

“My research just took a right turn, and I went with it,” said Richardson.

The research team built a test chamber that housed the liquid mixture at very cold temperatures to simulate the seas of Titan.

They added a two-inch, cylinder-shaped cartridge heater that would approximate the heat that a submarine would create.

One of the biggest challenges for researchers was understanding bubbles in the Titan seas.

Add a submarine powered by a heat-producing machine into the very cold Titan liquid, and nitrogen bubbles will form. Too many bubbles would make it hard to manoeuvre the ship, see, take data and manage ballast systems.

The next big problem, said Richardson, was getting a video in difficult conditions.

Richardson’s group engineered a solution using an optical device called a borescope and video camera that could withstand the low temperatures and high pressures to visualise what was going on within the test chamber.

The researchers succeeded and took video footage of ethane-methane rain and snow.

The group also studied the freezing temperatures for methane and ethane lakes and determined that, because of a small amount of nitrogen in the liquid, the lakes freeze at lower temperatures than would be expected: 75 Kelvin, or minus 184 degrees Celsius, instead of 90.5 Kelvin.

“That’s a big deal,” said Richardson. “That means you don’t have to worry about icebergs.”

The researchers said they were looking to continue the work with NASA to update the submarine design.