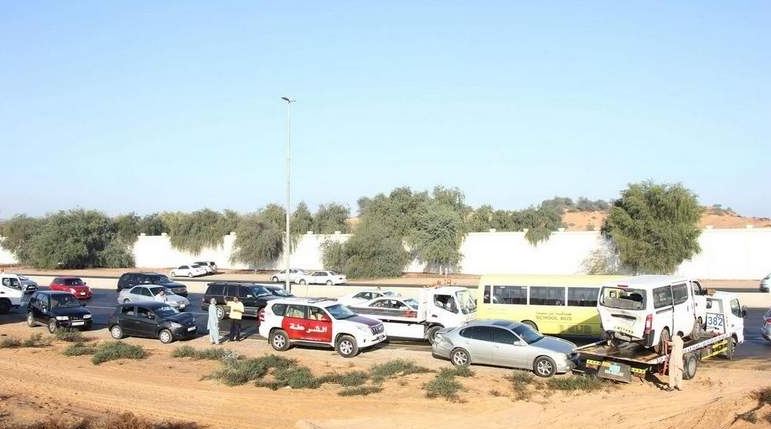 Five people were injured in four pile-up traffic accidents involving 26 vehicles on the Ras Al Khaimah roads due to the dense fog in the early morning of Tuesday.

Col Ali Saeed Al Alkeem, director of traffic and patrols department with RAK police, said all the four mishaps took place on the Shaikh Mohammed bin Salem road early in the morning because of the too much foggy weather.

“The first of these involved the collision of five vehicles in which four passengers were injuries. One received serious injuries while two sustained moderate wounds and the fourth was slightly injured.”

The second accident also happened on the same arterial road where four vehicles rammed into each other leading to the injury of a passenger, he added. “The third 11-vehicle pile-up, the biggest collision in the day, occurred on the same road, but luckily no one was injured.”

The fourth and final pile-up involved six vehicles, Col Al Alkeem said. “Also no one was injured in this accident.”

Urging, he said all motorists need to make sure that the front shield and all the car windows are clean before heading to any place. “The lights and signals must also be clean and working properly to avoid any hassles.”

Keeping a safety space, reducing the speed limit, and observing lane rule are so critical at all times, particularly during foggy weather, Col Al Alkeem underlined. “Poor take-over is one of the main reasons behind so many accidents.”

Indicating, he said all the vehicle lights must be on during the early hours. “Drivers would better head to the nearest police station in case of minor accidents that mostly end in no injuries.

Using the hazard light must only be used in case of an emergency or an accident, as these lights will confuse the drivers, and delay them for no reason, he affirmed. “Using hazard lights give the motorists no chance to indicate where exactly they are going to change their lane.”

It is also highly recommended for all motorists to check the weather condition via so many means of communication before taking the road, he advised. “This helps cub traffic accidents and casualties as well.”

Major General Ali Abdullah bin Alwan Al Nuaimi, Commander-in-Chief of the RAK Police, has ordered more than 30 traffic patrols to be deployed across the internal and highways of the emirate during the morning peak hour to ease and ensure traffic flow. “Drivers need to be more cautious during the dense foggy weather because of the low visibility.”